Sometimes people ask me about the story behind a photo. Where was it taken? Which camera did I use? How did I go about taking the shot? This has inspired me to write micro essays about some of them, adding an extra dimension and understanding for you, the viewer. If you'd like to know more about any of my images, please let me know and I'll add a micro essay here, just for you. 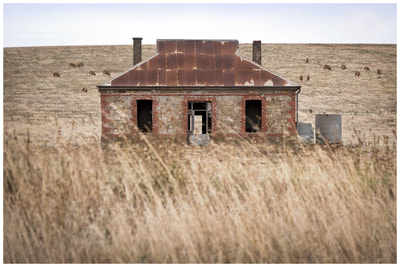 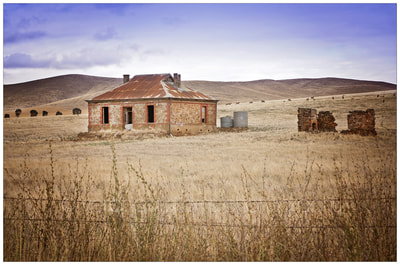 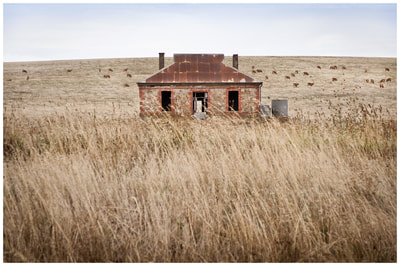 Summer in South Australia can sometimes reach the mid-40s. We'd had numerous hot and very hot days, with no decent rain for weeks. The landscape had quickly turned from lush winter green to dry summer brown. I'd chosen one of these hot days to visit a friend in Hallett, almost 200 kilometres north of my home. I packed my recently-purchased Fuji X-T20 mirrorless camera, with plans to capture some unique South Australian imagery along the way.

I took the A32 Barrier Highway from Gawler and passed through numerous small country towns. The landscape is dotted with abandoned homes in various states of dilapidation: some with only a small portion of one or two walls remaining; others, like the one in the photos above, where the full skeleton remains.

There were a number of signs around the property warning trespassers not to enter, which meant my access was very limited. There was a well-worn vehicle track running in front of the property, as well as a well-trodden path leading from the track to the fence line, and positioned at the very centre of the old homestead. I knew this place would be a mandatory stop for any photographer passing by, and had probably been shot thousands of times over its decaying life.  It was a juggle between trying not to take the same shot as the thousands before me (impossible, I realised), and wanting to return home with something worth looking at.

The property is at the base of a hill, and running along the right side is an unsealed road that climbs the hill. I ventured up the road, looking for a less-clichéd photogenic perspective, but was disappointed. I thought I'd be able to salvage the uneventful detour by shooting some sheep (with my camera!) at the top of the property, but they weren't willing to pose for me, so I returned to the front of the property and snapped, zoomed in, snapped, zoomed out and snapped again. And then I left.

I often wonder, as I drive past places like this, what led to its abandonment. The histories would surely be similar but interesting, nonetheless, telling of much simpler times: hard-working families; long, tiring and productive days; and hard yakka farm life, where everyone pitched in.

After word: I recently found out this homestead is a famous South Australian icon.

CAMERA: Fuji X-T20
LENS: Fuji XF 18-135mm f3.5
POST-PROCESSING: I wanted to add a bit of punch while maintaining the dry, remote and barren feelings I experienced there. I upped the contrast, added definition to the shadows, and increased the saturation a little. I added a strong vignette to the centre image and enhanced the blue sky.
​ 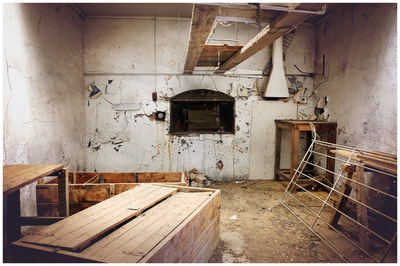 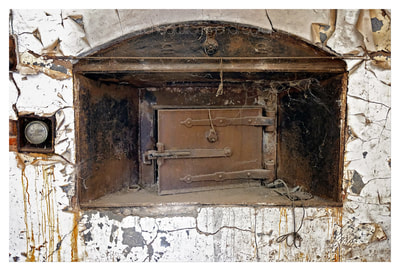 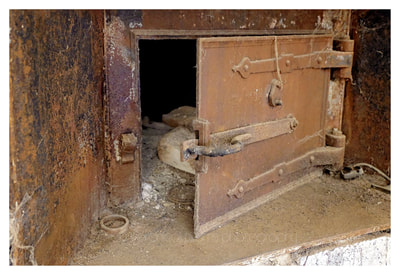 I came across this abandoned bakehouse a few months ago, in a tiny town in outback South Australia. Wary of trespassing, I decided the fallen fence indicated the owners weren't overly concerned about people exploring inside. It appears as though it has been undisturbed for years (I was mindful to keep it that way), and I was pleasantly surprised by the lack of graffiti and vandalism.

The random remnants tell the story of a once-busy bakehouse in a once-busy town. I love the rustic and rusty oven: the many and varied textures on and in that wall are fabulous, and it draws me in each time I visit this place. There are other rooms in this small building. Another, smaller one houses a large, silver pizza oven, much more modern than the one in these photos. There are a couple of other rooms in various states of disintegration, but none with as much character as this.

There's no shopfront at this bakehouse so I'm assuming the foods were taken elsewhere for sale, or delivered directly to customers. If my findings are correct, it opened in 1914 and closed in the mid-70s.

CAMERA: Fuji X-T20
LENS: Fuji XF 18-135mm f3.5
POST-PROCESSING: I wanted to draw out the rustic tones so added warmth, contrast (and a light vignette to images 1 and 3). I also upped the exposure and sharpened each one a little.